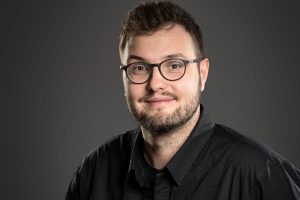 He was born in 1988 in Wrocław (Breslau), Poland. After his acting training at the private drama school “LART” in Cracow, he studied acting and puppetry at the public theater school “Ludwik Solski” in Wrocław. There he has worked as a freelance puppeteer in various productions since 2014 and has been invited to international festivals with the group “Klinika Lalek”, including in England, the Czech Republic and the Ukraine. In the “Digital Emotions” project, Konrad Bruno Till animated a computer-controlled avatar that was synchronized in real time for the first time in Europe. In addition to his engagement as a puppeteer at the Zwickau Puppet Theater from the 2016/17 season, he completed a post-graduate course as a cultural manager at the Art Academy in Szczecin (Stettin). Since the 2020/21 season he has been engaged as a puppeteer and head of his own puppet theater division at the Landesbühnen Sachsen GmbH.