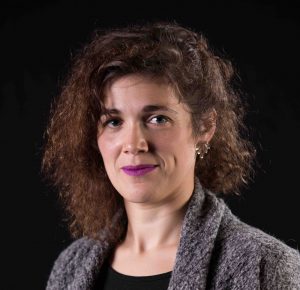 Born in 1984, in Carregosa, where she began her theatrical activity in the Amateur Theater group of the Friends of the Earth URATE Recreational Association, initially as an actress and later as the founder and director of the Fantochola youth theater.

In 2006, she graduated with a degree in Biology and Geology from the University of Aveiro She participates in forest watchers in the promotion of walking paths and in providing school support to disadvantaged students, among other projects.

In 2007 she works in dramatic expression workshops for children and participates in the Amateur Theater Training Course organized by the Ephemeral – Aveiro Theater Company.

She graduated as an actress in the School of Theater and Cinema, Lisbon, in the course of Theater Actors branch.

She is a member of the Direction of the Cooperative O Bando Theater and she performs in the most important plays of O Bando.

She is currently coordinating the Actor on Stage Awareness Training Workshops developed by the O Bando Theater.