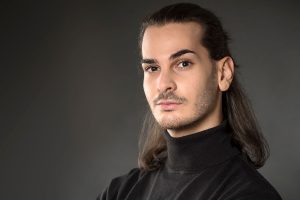 Gianmarco Martini Zani was born in 1997 in Lugo / Italy. He started his dance education in 2008 with the training program of the International Dance Association in Ravenna. From 2012 he intensified his training in classical and contemporary dance on a professional level in the training program of the Opus Ballet in Florence, where he had the opportunity, among others with Ivan Perez, Johan Inger, Anthony Missen, Laly Aiugade, Celie Amade, Tom Weinberger and Hillel Kogan to work.

In 2014 he joined the Company des Opus Ballett under the artistic direction of Rosanna Brocanello, where he worked in choreographies by Gustavo de Oliveira, Loris Petrillo, Aurelie Mounier, Arianna Benedetti, Samuele Cardini, Angela Placanica, Vasco Wellenkamp, ​​Philippe Talard, Patrizia de Bari and Johannes Härtl can be seen. From 2017 to 2019 he also worked for Fabrizio Favale’s company “Le Supplici” in Bologna. With these two ensembles he goes on tour through Italy, but also abroad to Panama, Portugal, Hungary, France, Jordan, Germany, Switzerland and Slovenia. Since this season, Gianmarco has been a permanent member of the dance company of the Landesbühnen Sachsen.