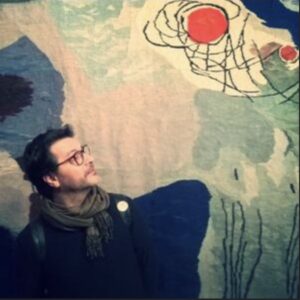 Davide Doro is an actor, author and director.
He has studied at D.A.M.S., the Theater section of the University of Bologna.
He trained as actor at Teatro delle Briciole in Parma, with Letizia Quintavalla, Bruno Stori, Marco Baliani, Maria Maglietta, Marina Allegri and Maurizio Bercini. He has worked with Mamadou Dioume, the company L’Impasto by Alessandro Berti and Michela Lucenti, with Liberamente by Davide Iodice, with Valentin Rossier (Theatre du Loup in Geneva), Camille Richard (Massalia Theatre, Marseille), Teatro delle Briciole Solares Fondazione delle Arti (Parma). He has also participated at the Venice Biennale of Contemporary Art with the project Ora Locale. In 2005 he has founded compagnia rodisio with Manuela Capece. Since then, compagnia rodisio carries on its work in Italy and abroad, produces performances for children and for all, develops research projects for children, teens and adults. Its performances are translated in 10 different languages: French, English, Spanish, Portuguese, Catalan, Greek, Russian, German, Danish and Japanese.