The Grasshopper and The Ants

One of the most famous Aesop’s fables brings us a story about a lazy grasshopper who spent his days in playing music and trying to persuade the ants to follow suit, and about the ants who were diligently standing in rows in front of their house and stapled the food for wintertime.
Through a modern approach, questioning the consequences of work and negligence, this play is asking some of the always up-to-date social questions. Through a contrast of ants as diligent people caring about securing their material future, and a grasshopper as a certain sort of a Bohemian enjoying the moment, the audience is facing the opposition of material goods in lack of which there is no progress and the art the importance of which is also undisputable.
Shall the grasshopper survive the wintertime when he realises that only his instruments are what is left, and shall all of the ants resist his song which is following them from day to day?
The actors’ play of four actors leads us to the world of little workaholics and one Bohemian, leaving us the space to conclude who is negative and who is positive in this story for ourselves, and whether such division is present at all in the story which, apart from the lead message, gives us also in traces the famous one teaching us that we are all different?

Working on the play

In the footsteps of a fable by La Fontaine we have elaborated his unambiguous premise “the one who is working should not fear of famine” in a way that we have conceptually and dramaturgically extended the story to the community of ants, which, even though it seems unison at the first sight, finally still consists of different individual characters of each ant independently. Starting with the ant who manages the whole collective work, up to the ant worker, who is facing issues with his hypochondriac side, and as it is appropriate, however the ants evidently are hard-working, one can always find an ant who is lazier and thus obstructs the arranged collective work in the community of ants. 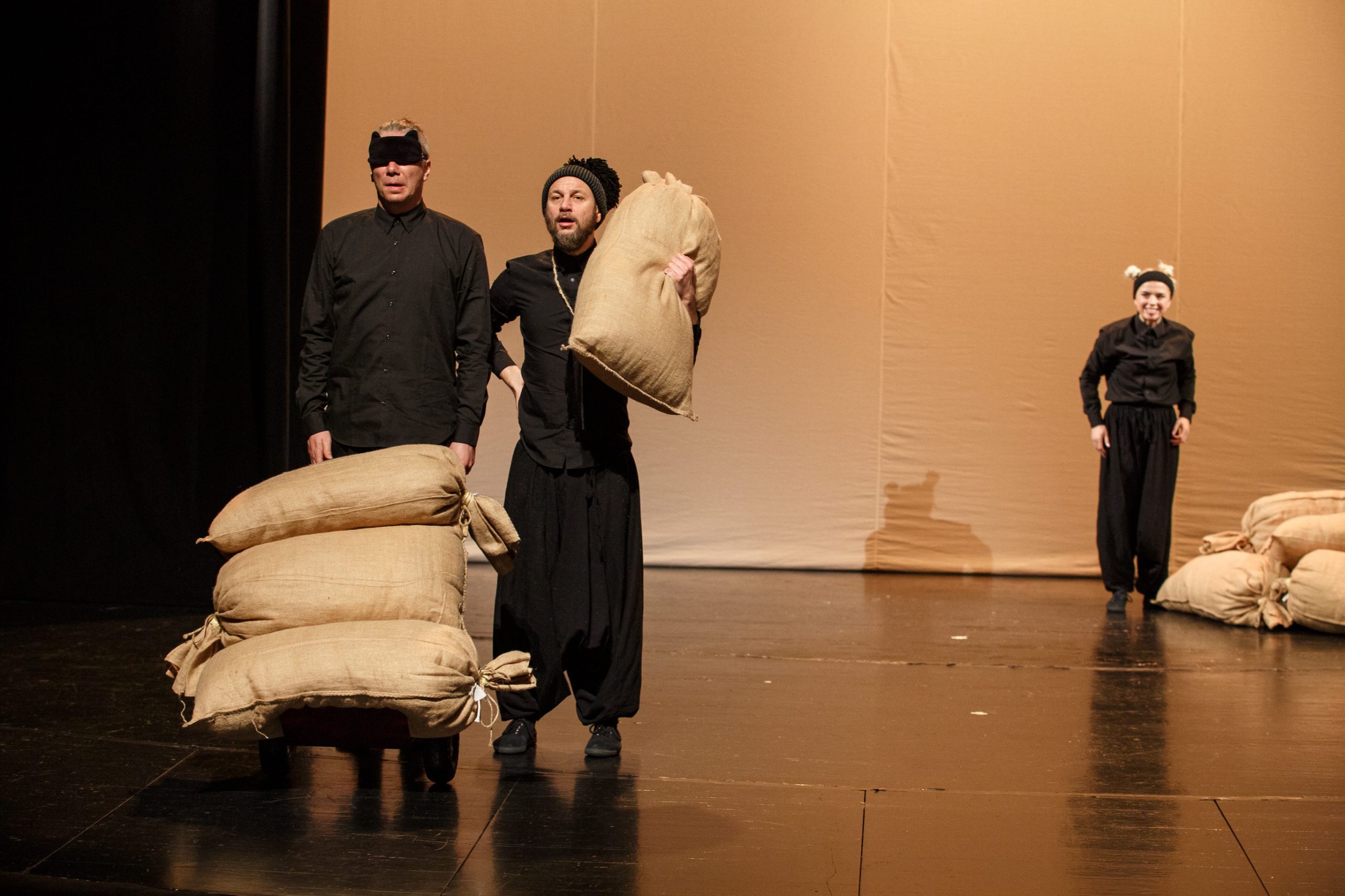 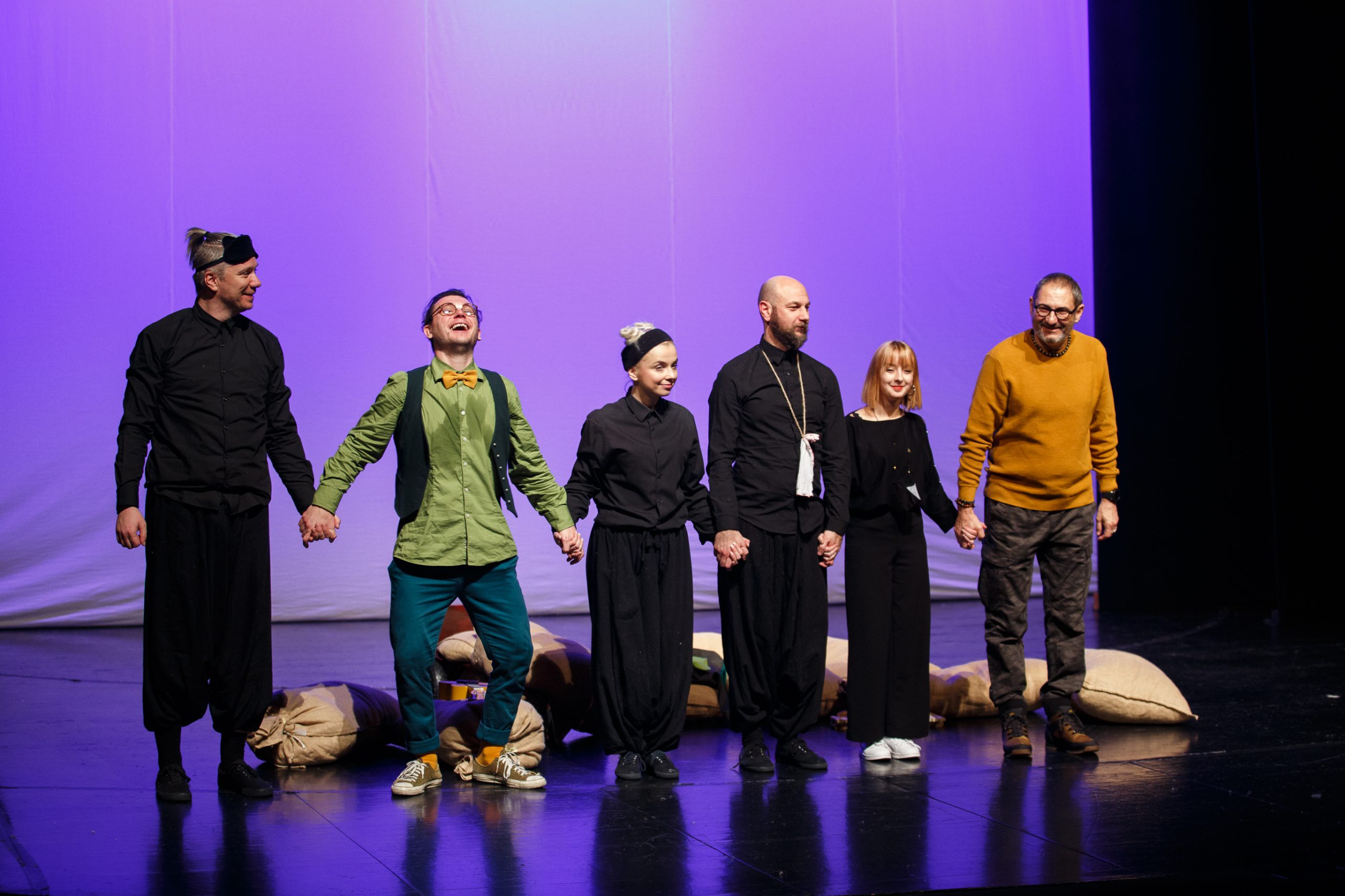 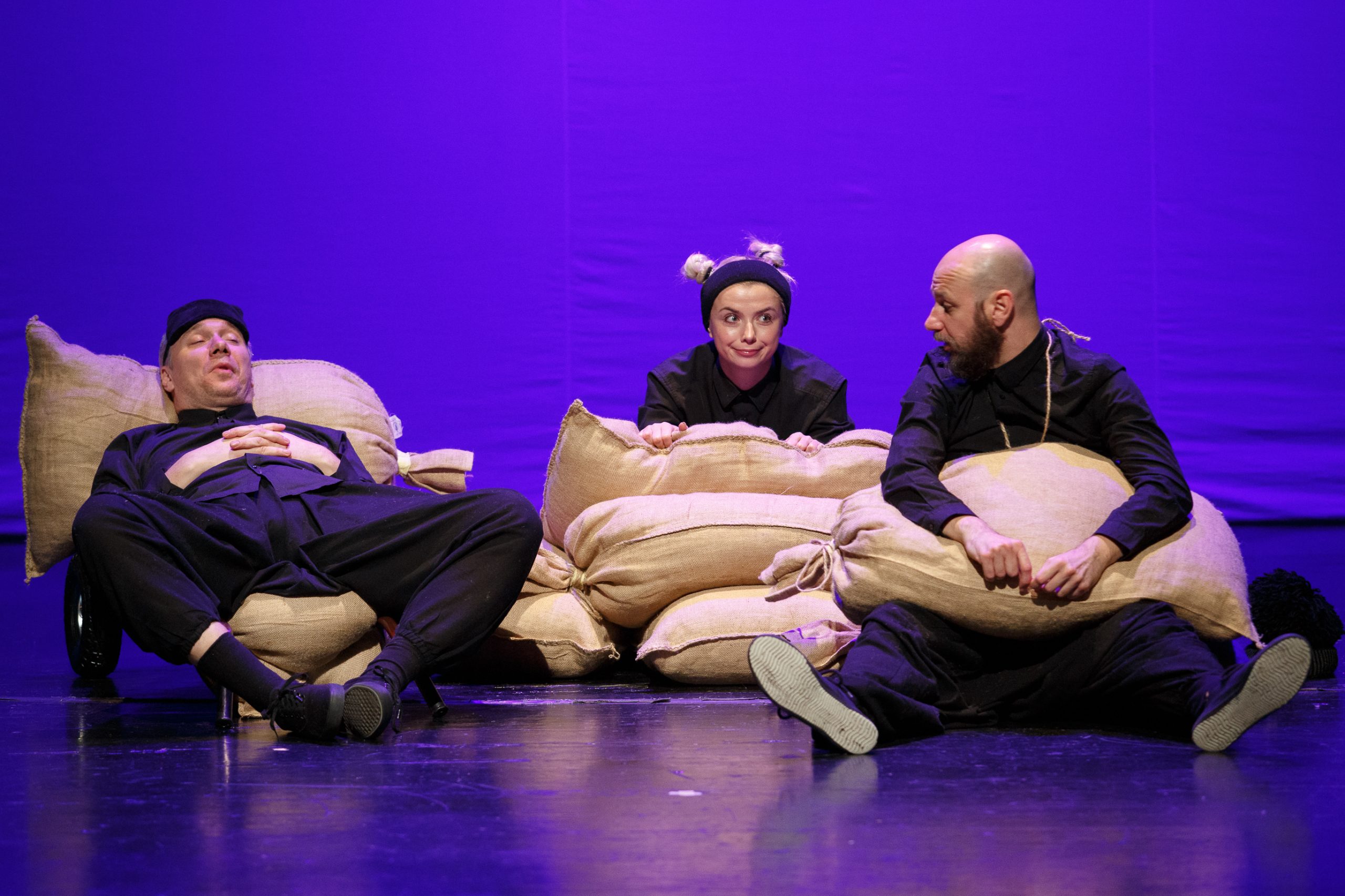 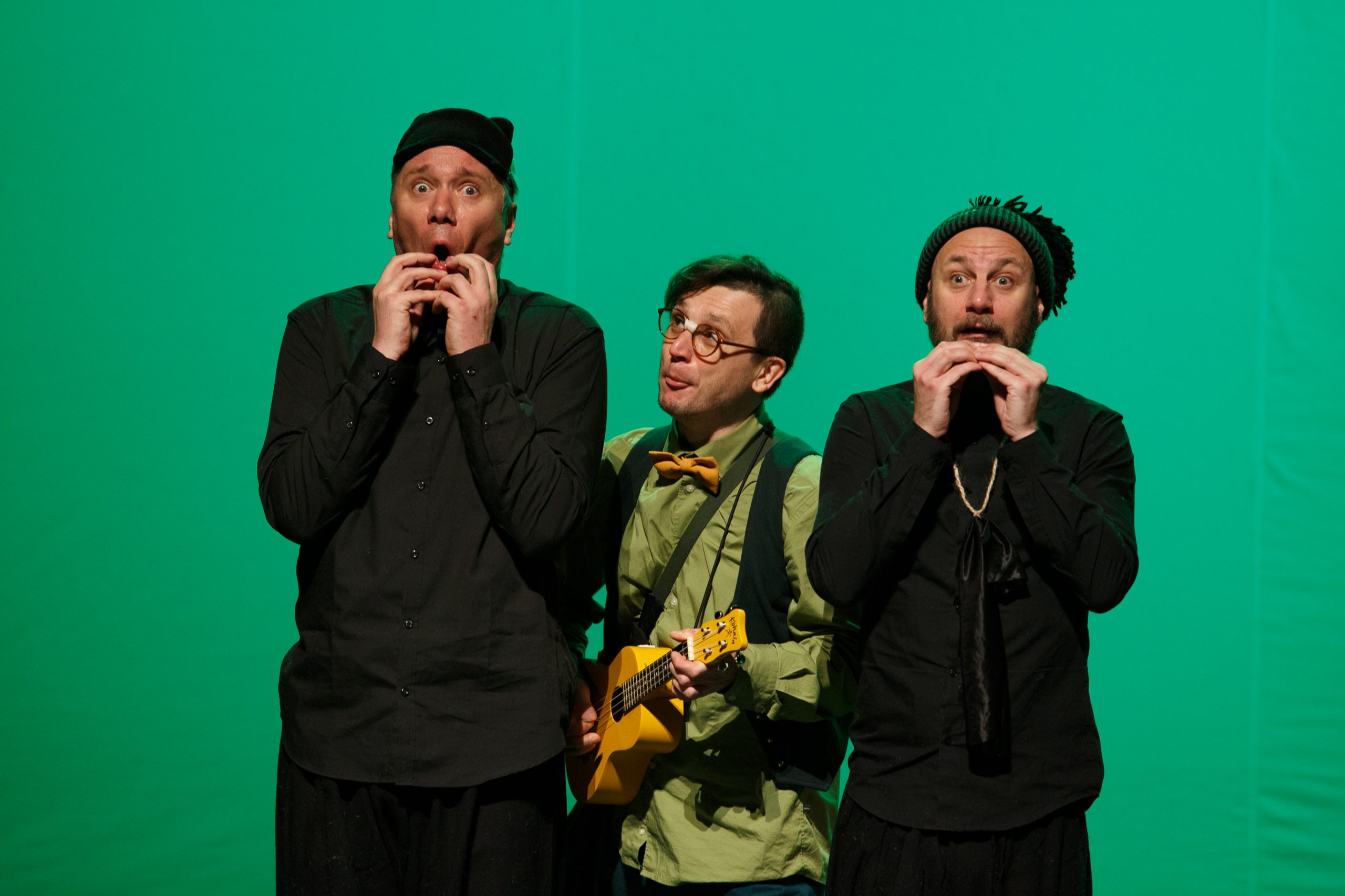 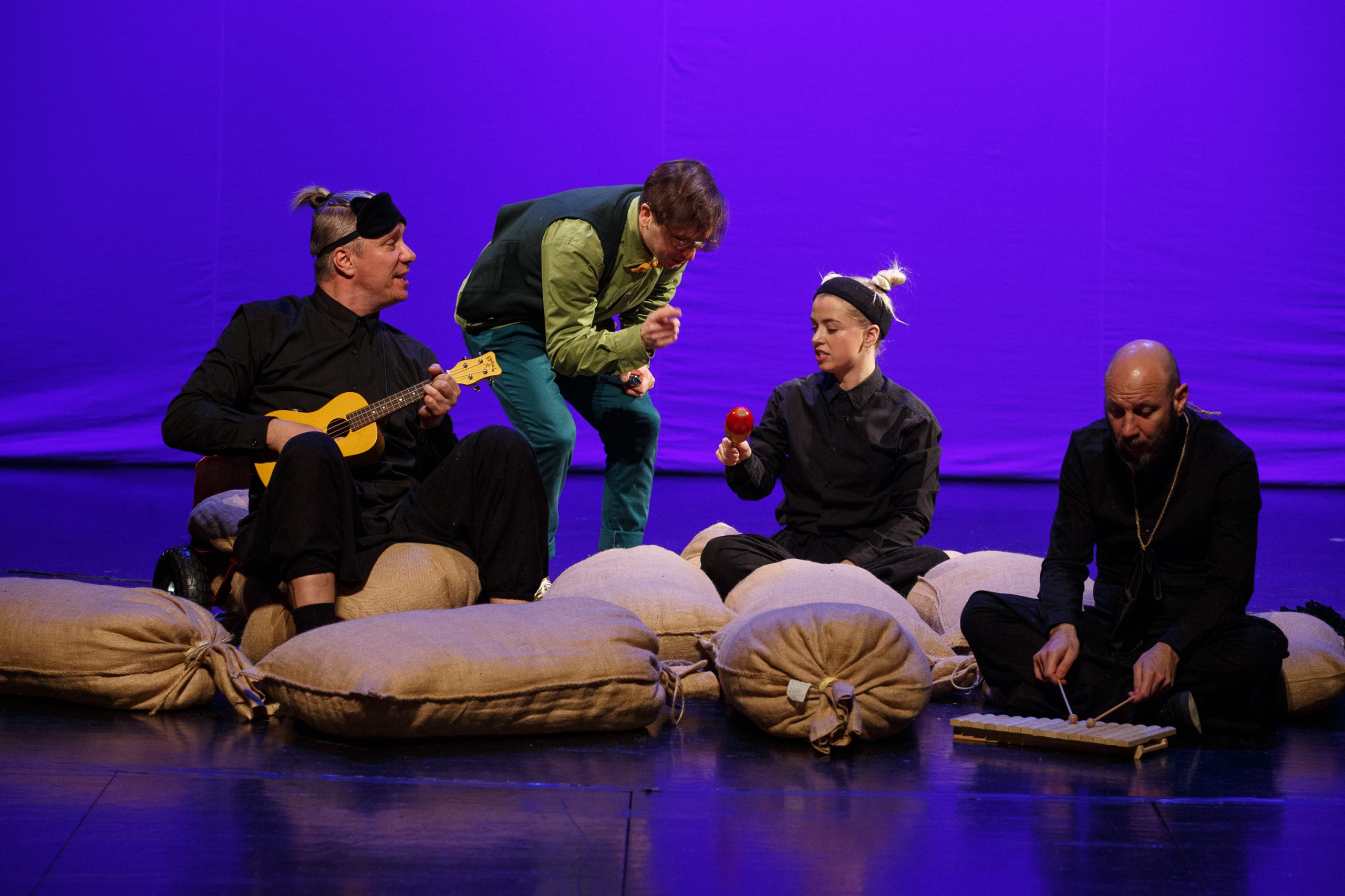 In contrast to them there is the Grasshopper, a self-educated musician, who apart from his primary role of a music player, has got an unquenchable urge to teach ants he gets to know to play music, even though they are steadily avoding him in order not to be distracted in their work, whatever kind it may be.
The staging of the play has been scenographically dismantled to ten burlap bags playing the role of food stocks ready for wintertime, and the whole stage area has been left for the actors for their play, which has been developed through a “work in progress” process, building the interrelations of characters, rhythmical sequences in the community of ants and destruction through interference of the Grasshopper into their routine collectivism. At the end ow the play, as the ants finally disclose to the Grasshopper that they also can play music very well, whe offer a subtle suggestion to the child audience that however important the work itself may be, the community and the society in general cannot be complete if it is not pervaded by any form of artistic creation.