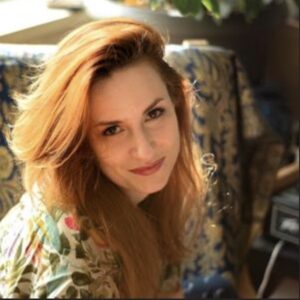 Varja Hrvatin  (1993) is a dramaturge, playwright, coorganizer of Festival of Young Playwriting Vzkrik since 2017 and editor and author of the radio show Territory of Theatre at Radio Student since 2018. She finished her BA in Dramaturgy and Performing Arts and her MA in Screenplay writing, both at the Academy of Theatre, Radio, Film and Television in Ljubljana. She writes theoretical texts for different professional publications such as Maska, Dialogi, Amfiteater and online platforms such as Kriterij and Neodvisni. Her plays have been published in publications Adept, Dialogi, Literatura, Sodobnost, Maska and November. Her play It All Began With the Bunny Rabbit Goulash received the best young playwright award at the 50th Week of Slovenian drama in 2020. As a dramaturge she worked on projects by Zavod Emanat, Zavod Sploh, Via Negativa and City of Women. In 2021 she staged her first two performances; I Wish the Earth Would Open Up and Swallow Me in production by Zavod Melara, which was accepted in the competing program of Maribor Theatre Festival and Zelda in coproduction with Mladinsko theatre which was accepted in accompanying programme of 52nd Week of Slovenian Drama.