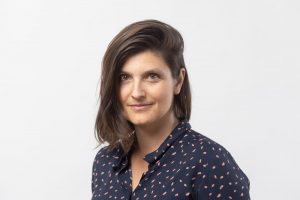 She is an author, artist, curator, producer, mentor, and City of Women programme director. Her art works have appeared at various Slovenian and international venues, biennials and festivals and have received a number of awards.

In addition to managing the festival, she has curated several international exhibitions and mentored and produced works by Slovenian female artists for the City of Women association. She has developed new year-round programme activities such as the digital archive, the Special Library for Contemporary Arts and Feminism, the arts education programme, the international residency programme, and the publication Reflecting City of Women. In partnership with other organisations, she has conceived and managed multi-year EU projects such as Performing Gender–Dance Makes Differences, Musica Femina, Women on Women, BE PART and Performing Gender–Dancing in Your Shoes. Under her leadership, the City of Women has received two EFFE Labels conferred by the European Festivals Association to the best festivals in Europe and the Princess Margriet Award, given by the European Cultural Foundation.

She is the former vice president of the Contemporary Dance Association Slovenia, member of the Prešeren Fund Management Board and vice president of the Working group for permanent dialogue with non-governmental organisations at the Ministry of Culture. In 2020, she was nominated artistic director and member of the Working Group for the preparation of the Ljubljana–European Capital of Culture 2025 candidacy.