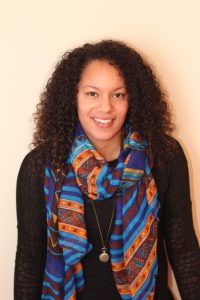 Sarah ‘Rain’ Kolawole is a Playwright, spoken word artist, Soho Theatre alumni and Associate Artist at the Nottingham Playhouse. She is originally from Nottingham.

Sarah has written and performed for a variety of commissions and events including the Takeover Festival at the Bunker, Derby Book festival, The Wind Rush anniversary, Ken Saro Wiwa anniversary at New Arts Exchange, The Primary Galleery at the Welbeck estate and other regional and national events.

Prior to Rootless Island Baby, Sarah wrote a short play: ‘Notts Sweet Home’ whilst on attachment with New Perspectives theatre which was part of a short regional tour.

Aside from writing, Sarah is also a qualified Social Worker of 11 years.