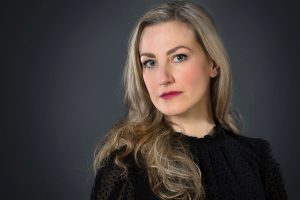 Sandra Maria Huimann studied acting at the Vienna Conservatory and has been an ensemble member at the Landesbühnen Sachsen since 2008. During my studies, the stage role lessons with Burgtheater actor and director Roland Koch and the engagements at the Schauspielhaus Wien, the Grand Theater de la Ville de Luxembourg and the Stadttheater Baden were particularly influential. During her time in Vienna, Sandra Maria Huimann learned the art of medieval sword fighting in addition to her acting training and trained as a Fiaker driver. At the Landesbühnen Sachsen she was seen as Johanna in “Johanna – Voices – A Journey to Jeanne d´Arc”, as Mascha in “The Three Sisters”, as Beatrice in “The Servant of Two Masters” and as Sittah in “Nathan the wise”. Sandra Maria Huimann is the singer of the rock band MARY & THE HOLY BALLS, with whom she wrote the music for the production “Baal”, and is part of the musical project MACHINE DE BEAUVOIR.