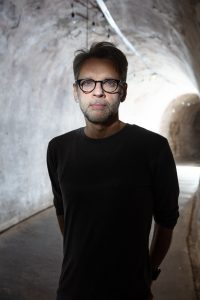 Primož Ekartis an actor and theatre and film director. In 1991 he graduated at AGRFT (Ljubljana’s Academy of theatre radio film and television) from theatre acting. Since then he played in many theatre performances. He also performed in several feature films as well as in many short films and tv series. He was a long-term member of Ana Monro theatre and one of the founders and pioneers of the improvisational theatre and street theatre in Slovenia. He was also a member of Studio for Research of the Art of Acting in which the actors explored Stanislavski, Strasberg and Michael Chekhov acting methods. In addition to acting and film directing studies at AGRFT he continued his education at Lee Strasberg Theatre Institute in New York and also participated at various home and international workshops lead by renowned national and foreign experts. In 2013 he directed his first short featured film. In 2015 he received his master’s degree in film directing at AGRFT. In 2006 Ekart founded his own production company Imaginarni institute where he is the artistical as well as the production manager. Primož Ekart directed theatre performances at MGL, SNG Drama Ljubljana, SNG Nova Gorica,Lutkovno gledališče Ljubljana, Šentjakobsko gledališče, Mini teater, PG Kranj and Cankarjev dom.