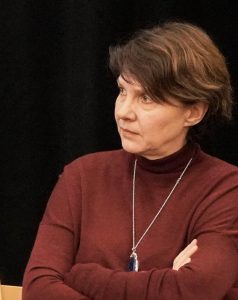 Theatre studies at Humboldt University, Berlin (GDR). Six years developing scripts for movies and moderating a programme for children and youth in TV. 1991 – 2005 chief literary manager of the biggest theatre for a young audience in Germany (carrousel Theater an der Parkaue in Berlin). As part of the Artistic Leadership renewing the theatre after the German reunification. Starting to work also as a playwright (mainly adaptation of novels for different age groups) and as a director (often in combination of professional puppetry and acting). Freelance working since 2005, mainly as a director in Germany and Norway.

From 1999 on one of the three initiators of EU-funded theatre projects like “European Schoolyard stories”, “Magic Net”, „PLATFORM 11+“, “Boomerang” and PLATFORM shift+ and “PlayOn”.