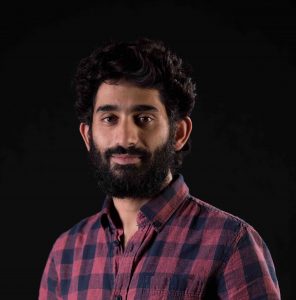 Born in 1984, he has a degree in Performing Arts from the Faculty of Letters of the University of Lisbon. He is a member of the Direction of the Cooperative O Bando Theater and member of the artistic direction, where he works as a playwright, writer, director and production coordinator.

In 2010, he founded Galateia – edition and cultural production, where he published his poems books First Road and Quarantine and the play Inês Morre (2011), which originated: Pedro and Inês, staged by Anatoly Praudin

Wrote the text and co-staged Quarantine, the commemorative spectacle of the Bando’s 40th anniversary; In 2015, he conceived the dramaturgy and staged the show In the Name of the Earth, from Vergílio Ferreira.

In the context of the European Project Platform Shift+ and under the aegis of António Maria Lisboa, in 2016, wrote and co-staged with João Neca the community show Do Fim; and in 2017, he was co-creator, actor and musician on the show This Is Not Europe, an international co-production with Collectif Le Nomade Village.