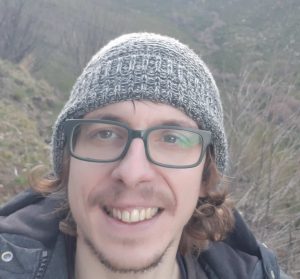 Born in 1988. His involvement with the theater begins very early, at 5 years old in the amateur theater group called “Teatro à Vela” in a small village with 300 inhabitants.

He studied Artistic Studies, with specialization in Theater at the Faculty of Letters of the University of Coimbra.

In 2011, he integrate o Bando’s team in staging assistance to Anatoly Praudin in the show PEDRO E INÊS. He is the founder and artistic director of the theater group Gambozinos and Peobardos based in Vela, a small village near Guarda. He has been writing, performing and staging various shows of this group since 2005.

Since 2013, at O Bando, he integrates the cast of EM NOME DA TERRA directed by Miguel Jesus, ABSTENÇÃO a staging by João Brites, AUSÊNCIA (whose text he wrote), DOS BICHOS, ALMENARA and INFERNO (based on The Divine Comedy) at National Theatre D. Maria II in Lisbon. In 2016 he co-directed with Miguel Jesus, DO FIM creation of O Bando and in 2017 he was staging assistance and part of the cast of ADOECER, directed by Miguel Jesus, a co-production of Bando with Centro Cultural de Belém. In 2017, he was co-creator and actor of the show THIS IS (NOT) EUROPE, an international co-production inside Platform Shift+ with Collectif Le Nomade Village and Theatre Massalia of Marseille. In 2019, he was responsible for the dramaturgy and the direction of FILHO?.