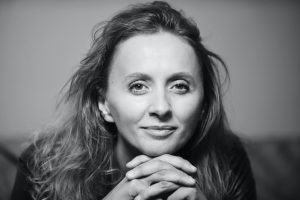 Born in Rimini, she graduated with honour in Classical Literature at the University of Bologna. Her theatrical training began in the Compagnia degli Scalpellini theatre laboratories then with other maestri, such as Antonio Latella, Letizia Quintavalla and Konrad Zschiedrich. She has worked professionally since 1997, and in 2000 she joined Elsinor Teatro, as both an actress and a playwright. In 2010 she started directing plays for young audience. Since 2012 she’s artistic director of the Teatro Testori, in Forlì, and artistic co-director of Elsinor, together with Gianluca Balestra, Stefano Braschi and Rossella Lepore. From 2014 to Jan 2017 she was a member of the national board of Assitej Italia. In September 2016 she was appointed artistic co-director (with Renata Coluccini) of Segnali, one of the most important festivals of theatre for young audience in Italy organized in partnership by Elsinor and Teatro del Buratto.