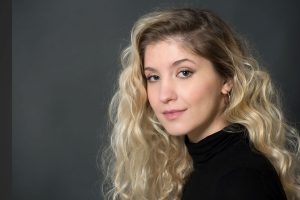 She completed a degree in dance theater at the Trinity Laban Conservatory in London, which she completed in 2012 with a bachelor’s degree. During her studies, she did internships at the renowned NDT 2 (Netherlands Dance Theater) in the Netherlands and at the Joss Arnott Company in Great Britain

After 2012 she worked as a freelancer and participated in various dance projects in Great Britain. She became a member of the “Jasmin Verdimon Junior Company” in London. From 2016 she danced for the “Balkan Dance Project”, where she worked with choreographers such as Igor Kirov, Aleksandar Ilic and Natalia Iwaniec.

In 2015 she founded the “Dance Company & M” together with a colleague. Until 2019 they choreographed and danced five full-length dance pieces together under this label. In 2018 Ema worked as a dancer at the State Opera Unter den Linden in Berlin for the opera “Hippolyte et Aricie” in the choreography by Aletta Collins. Since the beginning of the 2019/20 season, she has enriched the ensemble of the Landesbühnen Sachsen.