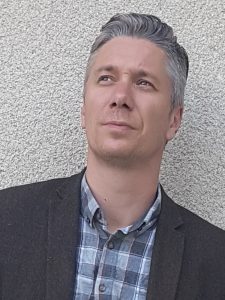 He is actor and drama pedagogue at the Theatre Company Pinklec employed in Centre of culture Čakovec, Croatia, member of Croatian Association of Drama Artists.
He played in more than 30 plays in various productions and co-productions in Theatre Company Pinklec and several other theatres in Croatia, of which many award-winning plays at eminent festivals in Croatia and the region. He is the head pedagogue and founder of Drama Studio Dada in Theater Company Pinklec where he directed more than 20 theatre plays with youngsters and was awarded with the “Zvjezdana Ladika” award by Croatian Assitej for best pedagogical work on a play. This award is one of the highest award in Croatia for theatre pedagogue. Since 2013. he has been a representative of the Network of Professionally Guided Theaters for Children and Youth at Croatian Assitej.