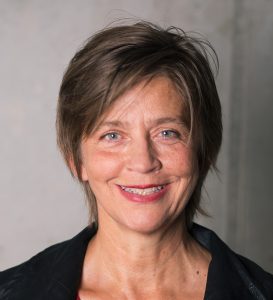 Artistic Director of DSCHUNGEL WIEN since 2016/17.

Works and lives with her family in Vienna.

Trained as an actress and dancer in New York at the Nat Horne musical theatre school and in San Francisco at the Dell´Arte School of physical theatre.

She started to work in theatre at Junges Theater Basel, where she later on worked as director. Corinne Eckenstein has been working as a freelance director and choreographer since 1995. She directed and choreographed as well at Junges Theater Basel, Theater der Künste, Zürich, Theater der Jugend, Schauspielhaus Wien and Junges Schauspielhaus Hannover. In 1995, she founded the Off-Theatre Company: TheaterFOXFIRE together with the author and director Lilly Axster. Creation and world premieres of several pieces performed at various theatres in Vienna. When DSCHUNGEL WIEN – Theatre for Young Audience opened in 2004, an intensive and successful cooperation with TheaterFOXFIRE started.

From 2012 -2017 Corinne worked with an all male dance company (Boys don’t cry, Boys Awakening etc.), touring and performing in Europe.

Corinne Eckenstein’s work is characterized by the fact that she develops pieces in writing labs together with the performers, as well as working with teenager and children together with professional dancers and actors.