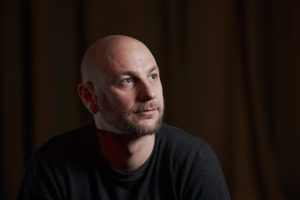 Born on 17th of August, 1979., same day as Robert de Niro and Sean Penn in Čakovec, Croatia. Went to primary school just across the street of my home and to high school in Varaždin. After high school I went to Zagreb to become mag.ing.techn.lign at Faculty of Forestry. Worked, working and will work as furniture designer, interior designer and set designer.

Did my first play with the couple of friends in the basement of my building back in ´92. during war alerts. We had 5 people in the audience. One of them was my mother. She made puppets for the play.

After that I came to the ˝real˝ theatre in 1999. Joining Theatre group Pinklec, my theatre life begins. At first and since I lived in Zagreb, I participate in one production per year or two, but as soon as I came back to live in Čakovec, I grab the opportunity to get on the track. At the approximately same time Theatre group Pinklec changed status from amateur group to professional group. It was 2007. and from that year on I am a professional actor.

Since then, I played more than 1200 shows and participated in 33 professional productions as an actor, 10 as set designer, 3 as co-director and 2 as choreographer.

At the moment, I have 11 ongoing titles.