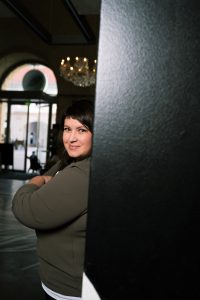 Anna Sonntag was born in Vienna in 1981 and studied theatre, film and media studies in Vienna. During her studies she worked at various theatres and for different organisers as a dramaturge, production manager, stage manager and assistant director (e.g. Wiener Festwochen, Theater FOXFIRE, Wiener Metropol and Dschungel Wien) and attended various festivals with the self-founded theatre association Spielhalde, including the Fringe Festival in Edinburgh and Prague. After graduating, she worked as a booker, production manager and dramaturge for ORF RadioKulturhaus for over six years until she changed to Dschungel Wien in 2017, where she took over the pedagogical department in the first year of Corinne Eckenstein’s directorship. She then went to monkey music, an Austrian label, as label manager until her path led her back to Dschungel Wien, where she has been the production manager since the 2019/20 season.