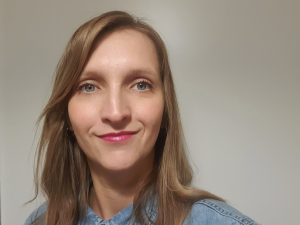 Born in 1985 in Čakovec. She graduated from the Faculty of Humanities and Social Studies in 2010 and has an MA degree in Croatian language and Linguistics. She had been working as a Croatian language teacher in primary school Gornji Mihaljevec for two years and has been working in secondary school Srednja škola Čakovec since 2015, also as a Croatian language teacher. She is also managing a school drama club in Srednja škola Čakovec and she is a member of the Drama studio Dada at Theatre Company Pinklec since 2017, where she takes part in different activities, such as occasional workshops and weekly drama classes. She took part in numerous workshops and different programs besides Drama studio Dada, with other different associations and institutions offering education for teachers and drama club managers. Her opinion is that working with teenagers is always a challenge, it makes teachers be up to date with late trends of all kinds and constantly working on improving themselves. Running a school drama club gives an opportunity to a teacher to learn a lot about himself, about young people and all people in general. Being a member of the drama club makes an individual discover places he has never been before, literally and metaphorically, helps him to find self-esteem and to move his boundaries.